skip to main | skip to sidebar

Good evening! I've been slaving away on getting things ready for my classroom this week (yes, I know tomorrow is a holiday).  Since I've been out for the entire last week at Common Core training, I just feel so unprepared.  But then I sit down and think through Tuesday, and I'm really OK. Sure, there are a bunch of things that need to be run (spelling homework, writing work station papers, listening work station papers, etc), but the bones are all there. 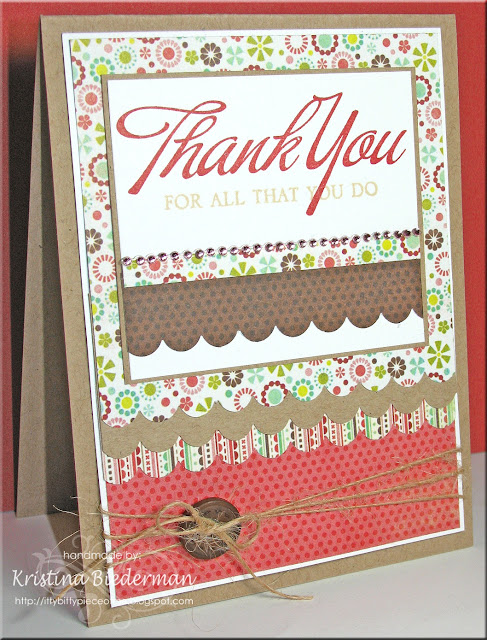 This is definitely one of those moments where I am feeling the advantage of having taught the same grade for four consecutive years.  I've had the amazing realization that the lesson plans, though not written down, are thoroughly ingrained in my head.  I know what to do on Tuesday.

So, I rewarded myself for all of my hard work for the last few hours by making a card with this week's Deconstructed Sketch.  That big image panel definitely strained my brain for a bit.  I ended up making the entire card and simply leaving the white image space blank.  Then, a few scraps from the card started sticking out on my desk. A little manipulation, and... Voila!  Giant sentiment and some jewels and scallops to mimic the scallops below. Phew!

Now I need a break from work and card making.

Thanks for much for stopping by!

Posted by Kristina at 5:30 PM 3 comments

Good morning! Oh how blissfully happy I am to have a four day weekend!  I know I've been out of the classroom for 6 of the last 9 school days for a Common Core training, but good golly! My brain is TIRED! I can't think anymore. 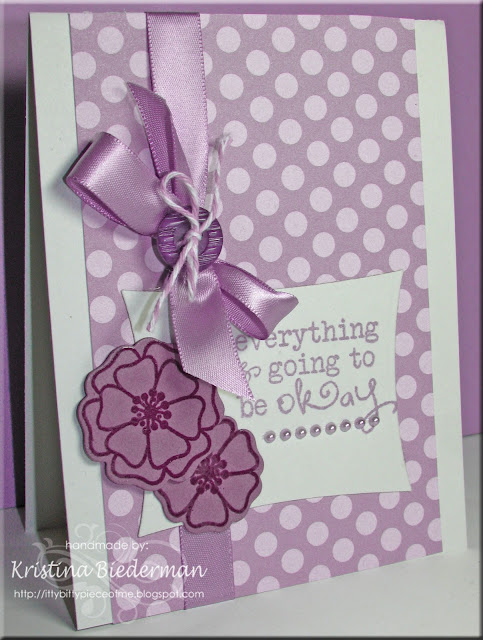 Obviously, the perfect solution for break deadness is making cards. :)

I pulled up this week's Viva la Verve sketch and immediately formed a plan in my head. A very monochromatic plan in my head.  I knew I wanted to use some flowers from Joyful Blooms (hooray for the awesome matching dies!) and decided to pull out some plum pudding card stock to give the winter wisteria a little bit of contrast. I embossed them with clear ep and then popped up the larger of the two with dimensionals.

The bow was calling for a gorgeous bow/button/twine combo and thank goodness I had ordered some lilac twine a month or so back!  The sentiment is a Plain Jane and I added some lavender pearls under them to make it pop just a wee bit more. 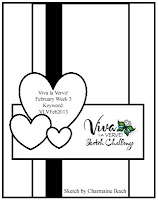 I'm off to go help a friend get moved into her new apartment today!  The process of moving and unpacking, as we all know, is miserable. But the company of good friends not only makes the process faster, but definitely more fun!

I think I am literally squeaking in under the line for submitting this card for last week's Sweet Sunday Sketch. I have had this card sitting half-completed on my desk for over a week.  Staring at me. 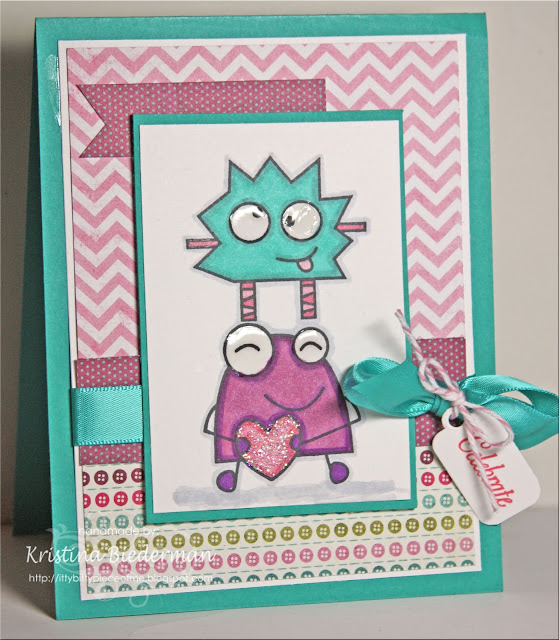 Begging to be finished.

Phew!  I had an idea for this layout, and went with some way brighter tones than my normal realm of comfort.  I love these little Love Monsters from TE. I decided to stack a few up and make a sweet  birthday card for one of my little cousins. We've got lots of birthdays coming up in the next month or two and I'm sure we'll be having some family get-togethers. :)

I added some glossy accents to the eye. And please try to ignore the smudge on the one eye... My nail bumped it while tying the twine bow. Darn it!  I also added some stickles to the heart for a little extra sparkle.

I'm off to keep crafting away. Gotta tackle that Viva la Verve sketch next.

Posted by Kristina at 5:53 PM 2 comments

THE RAVENS WON THE SUPER BOWL!

Just needed to get that out of my system.

I was intrigued by all of the variegated flags on this week's Deconstructed Sketch and thought I would give it a try.  I pulled out some coordinating dp, cut a few strips, adjusted the widths, and hand cut the flag tips since I had used custom widths instead of dies. 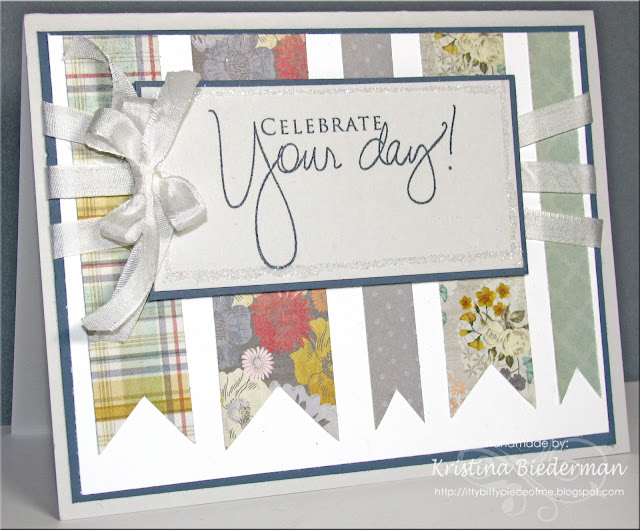 I played around with the sentiment panel's shape a bit. I originally started with an oval, like the sketch, but didn't like the look with the sentiment I wanted to use. So, scratch the sentiment, grabbed a new panel shape, and all ended well. I think.  I ended up added a third frame around the sentiment using glitter to make it stand out a little more amidst the sea of flags.

I also played around with the twine/ribbon in the background for a good while.  I didn't have a twine that really worked (hmmm... Maybe time for some shopping?!), so I ended up with this little scrap of silk ribbon that I have. I love the soft look that it created. I made a double bow to give it a little more dimension. One bow was really small and kind of lonely looking on the card.

I'm psyching myself up for a late evening at work today making sure the room is ready for my sub for the next two days.  I'm mostly done, but the perfectionist in me worries about every little detail.  What if I forget something?  What if I didn't mention something in my plans? What if I neglected to set out one little tiny thing that will end up being huge to a sub?! AH!  I need to let it go.  She's an adult. She'll figure it out, I know.  But I still want it to be perfect. 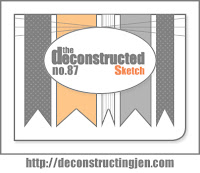 Thanks for stopping by today!

Posted by Kristina at 7:30 AM 3 comments

I'm off to a friend's house to celebrate this annual holiday and cheer on Baltimore. Food, friends, football. It's a trifecta. :)

Now on to the card. 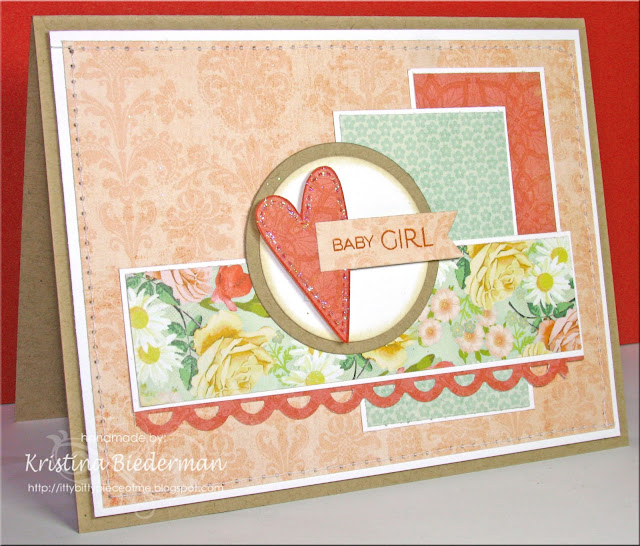 I used this week's Viva la Verve sketch, which was sweet and simple. I pulled out some spring/Valentine's colored papers and got to work. I'm heading to baby shower this time next week and thought I should whip up a card for the occasion.  My bf is having a little girl next month and these colors screamed girly.

I sewed around the outside panel, but left the others plain.  I stamped the larger of the two hearts from Text Objects, fussy cut it, and then added a little sentiment from Over the Moon.  I also added some glitter to the heart to make it the focal image when looking at the card.

Have a wonderful Sunday!

Thanks for stopping by.

Posted by Kristina at 7:30 AM 1 comments

Not to mention that we are most definitely over half way through the school year. In the second month of the calendar year. And there are WAY too many holidays in this month.

But, alas, here is my February Currently. :) 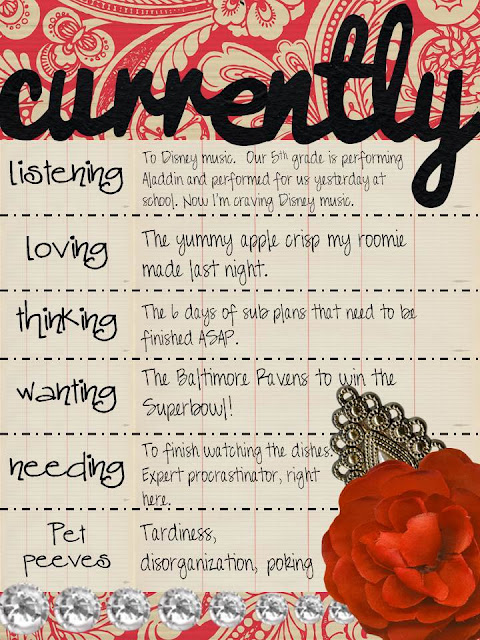 I am a child of the 80s.  Aka- The Disney Era.  I have this love of all things Disney music.  But not the modern stuff. We're talking about the classic animated movies.  Thank goodness for Pandora!

6 days. I am going to be out from my room for 6 days this month.  I think I may be suicidal.  Our district is sending a few representatives to a few multi-day Common Core training conferences and I have been nominated/volunteered as the 1st Grade leader. Yay me?

I have to admit that I am a little bit excited. I always come back so rejuvenated and energetic after conferences.  I'm hoping this one will be the same.

This weekend is going to solely consist of typing sub plans, and maybe working on some sub plans.  Let's put it this way.... I am going to be out of my classroom for the next 5 out of 9 days. Yeah. Poor sub. ;)

On to the Superbowl.

I was raised a die-hard Packers fan.  I was also raised to be a die-hard anti-49ers fan. Thus, I will be cheering for the Ravens.

Did you know that the Baltimore Ravens are the only NFL team named after a literary work?  Edgar Allen Poe's "The Raven."

Extra bonus points for the Ravens, in my opinion.

Yeah. That should say "washing the dishes." Your eyes didn't deceive you. but I'm too lazy to go back and fix it.

I'm supposed to be doing the dishes right now.  Obviously that's not happening. :)

DON'T BE LATE! If you say you are going to be someplace at a certain time... Be there!  Habitual late people really push my buttons...

Disorganization is another one. I'm a crazy organized person.  Therefore you should be, too. Simple, right?!

Ah, poking. Yeah, this one stems back to my first year or two of teaching when I was still working on my classroom management.  I used to have kids that would stand by me to ask a question and use their finger to repeatedly poke me in the arm to get my attention. HATE!  Thank goodness after eight years, I've got that one under control, lol!

Thanks so much for stopping by! 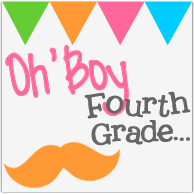 I have a card to share with you. Finally. 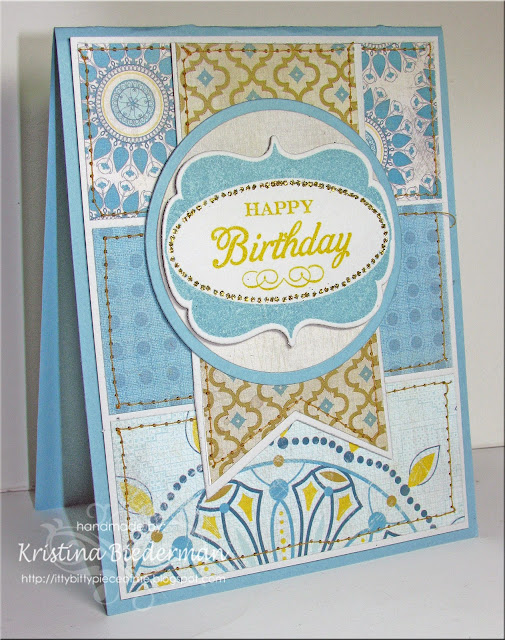 I loved the panels in Karen's Sweet Sunday Sketch for this week, and paired with some new (to me) dp, it was a match made in heaven.

I sewed on all of the panels, including the flag, with some golden thread to bring out the golden colors in the dp.  I also added some gold glitter around the sentiment to add a little sparkle.

I pieced the sentiment together from PTI's Happy Day set, which has been sadly underused by me.

It's back to working on sub plans for the six days I'm going to be out of my classroom over the next two weeks.  I'm hating life at the moment.  This could require lots of stamping breaks. ;)

Posted by Kristina at 7:30 AM 1 comments

Kristina
Hello! I am a first grade teacher who loves to get crafty both in the classroom and at home in my free time. I am in my eleventh year as a teacher, my seventh of first grade. 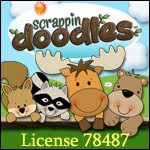